Call us at the number at the top of the page or fill out the form below! 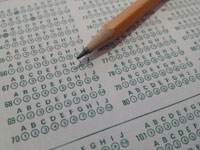 Is it time to dispose of standardized testing?

Grading can be difficult on an individual level- what separates an A from a B on an English essay? Does a student who demonstrates knowledge of the concept but makes a simple mistake get half credit? These answers vary from instructor to instructor, and it only gets more complicated when you add more students. Measuring an individuals progress can be strenuous enough, but how do you evaluate an entire class? A school? A district, a state, a whole country? Well, one answer is standardized testing, but thats been met with increasing skepticism.

The State of Standardized Testing

Since No Child Left Behind(NCLB), parents and educators have rebelled against the notion of standardized tests being the metric of students and teachers success. Contenders argue that NCLB was a failure and a poor tool for measuring actual learning. However, standardized tests continue to be the main way that officials measure educational progress. The vast majority of states still use them to hold districts and teachers accountable. Predictably, this has led to push back against standardized testing, and recent events have only fueled the fire.

Parents were aghast over the results 2016 STAAR exam (State of Texas Assessments of Academic Readiness). Not because their children performed poorly, but because of issues with the vendor, Educational Testing Services. Problems ranged from computer glitches that erased students answers to losing tests altogether, according to the Dallas Morning News. This caused a lot of concern of whether students would still face the consequences of such a flawed exam. Parents worried that their children would be forced to attend summer school or repeat a grade level. And while districts have dismissed consequences against elementary and middle schoolers, they are unable to do so for high school seniors. Their graduation requirements are mandated by law, which specifies that seniors must pass three of the five exams, and the delayed results are preventing some seniors from graduating with their class. Furthermore the STAAR exams will still count towards individual school accountability .

And those are just disadvantages with the test themselves; as illustrated above, it is an additional ordeal afterwards. Not only are standardized tests harming students education by morphing how they are taught, it is hurting their ability to move on to the next level. However, they are also clearly here to stay for some time. Because they can be so important in determining a students future, it is crucial that they perform well.

Getting Started Is Easy.

Please fill out this form and we’ll contact you to answer any questions you have:

Thanks for your interest in our scholarship! Every six months, we select the essay that our panel of 3 judges determines to be the best.

The Fall deadline to apply is November 15th. The Fall winner will be announced to all applicants on December 10th.

The Spring deadline to apply is May 15th. The Spring winner will be announced to all applicants on June 10th.

The current essay prompt is, “Who has inspired your education the most and why?”

Please email your entry to: scholcontest@gradepotential.com